Ever since his promotion from manager of Barcelona B to manager of Barcelona Josep Guardiola has become synonymous with winning trophies. In four years as Barca’s 1st team manager he won every trophy that can be won… several times. He then went to Bayern Munich in Germany and kept winning trophies. Everyone was thinking “Ok, he won in Barcelona, but with this team I can be their manager too. In Germany everyone can win the Bundesliga with Bayern. He needs to go to the Premier League and see how good he is.” So when in January 2016 Manchester City announced that they reached an agreement with Pep Guardiola to take over the club from the beginning of the 2016-201 season, people got excited. Yes, Man City were already one of the best teams in the country, they were always title contenders, but what happened in the next couple of season was astonishing.

The Citizens won 3 Premier league titles in a row. They were especially dominant in the 2017/18 and 2018/19 seasons where they broke almost every record that there is to break in English football: most goals scored, most points won, most games won, most home wins, and longest winning streak. They were as a team a pleasure to watch. They were scoring with such easiness, their attacks were so fast, danger was coming from everywhere, and every player was a threat for the opposition’s goal. They changed the Premier league and English football all for good. But with all the domestic success they had in the last 4 seasons, with all the titles, the league cups, and FA cups something in their trophy cabinet was missing. You can’t be considered one of the best clubs in the world without winning the “Ol’ big ears.”

The Champions League is a dream for every player, manager, supporter and practically everyone who’s football related. And City has failed to deliver in the Champions league in every season since Guardiola took over. Their attacking style of play was exposed. Losing to respectively Monaco, Liverpool, Tottenham, and Lyon meant that the Citizens needed something different. After splashing 68m € for Ruben Dias from Benfica and 40m € for Nathan Ake from Bournemouth, Pep was hoping to settle his defensive problems. And they delivered. The pair of John Stones and Ruben Dias is currently the best in the league. City conceded only 13 goals in the 16 games they played, meaning they have the best defense in the league. They conceded only 2 goals in the last 8 games after the defeat from Tottenham on 21st of November, one of them against Chelsea with the score being 3:0. City changed the way they move the ball, changed the way they attack, changed their game style fundamentally. They only scored 25 goals so far means that they have the worst attack in top 9, nevertheless they became tittle favorites again. Watching their games lately it’s not looking likely for them to concede a goal. The whole team moved back a couple of meters maintaining close distance to each other, moving the ball fast in their own half and around the center line, forming triangle where it’s very hard to steal the ball. 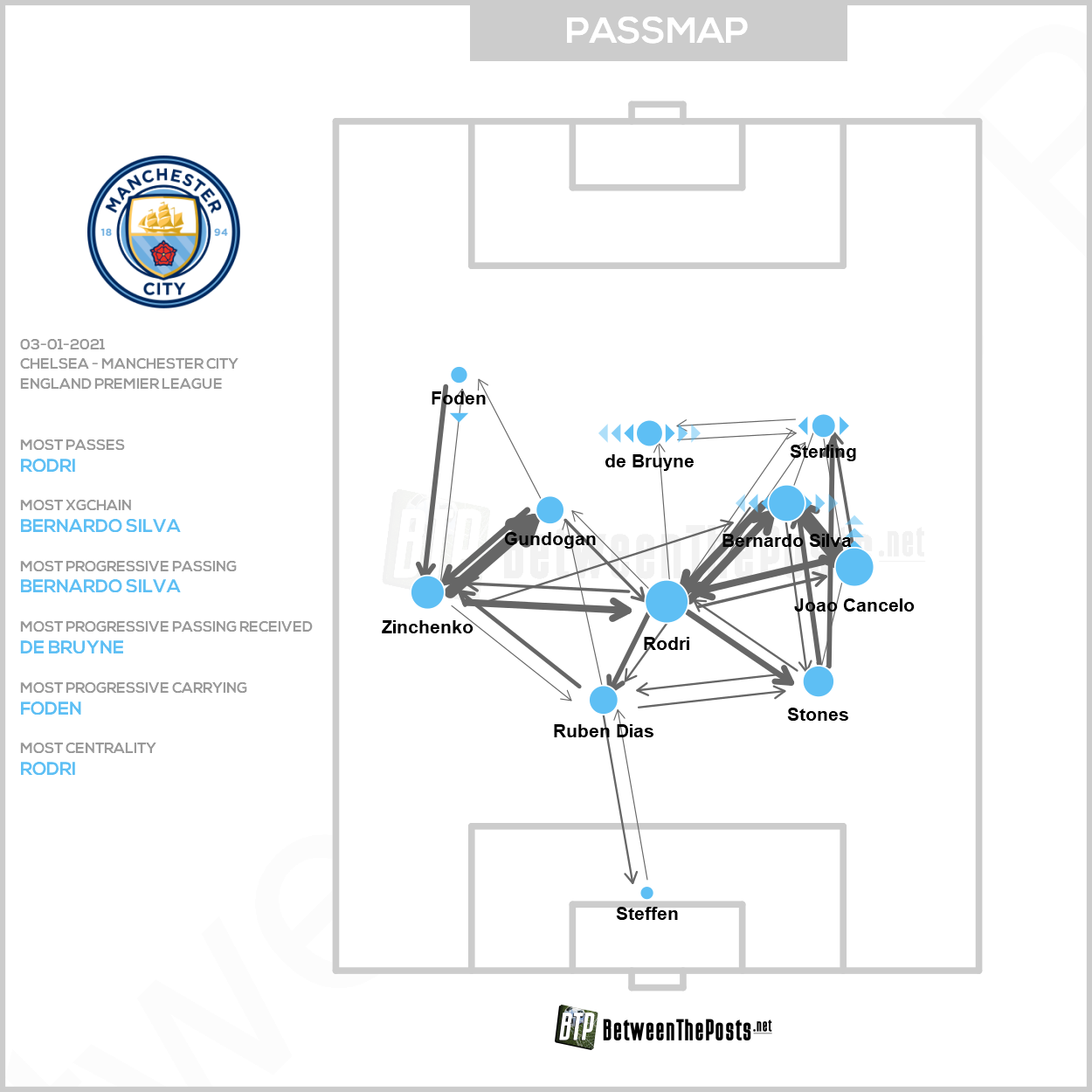 Here is how they did against Chelsea at “Stamford bridge.” You can clearly see the movement of the ball and the triangles that helped City neutralize every attacking threat Chelsea had. Maybe this change was provoked by their squad problems. Aguero was injured for a month, Jesus missed couple of weeks, first because of a knock, then he got the Corona. So City’s two forwards were not available for some time. Both of them have had problems getting into their best shape after missed time, so Pep had to improvise, adapt, and overcome these issues. So the tactical changes came into use. And Guardiola is one of the best in terms of tactical changes.

Will these changes bring the so coveted European success that everyone connected to Manchester city dream of? Will they be able to shut down Europe’s biggest teams attacking threats? They might not be so entertaining to watch now but the results justifies the means. We have seen a lot of teams winning silverware by putting efficiency over entertainment. So will this work for Pep and his Man City? Will they fulfill their dream of Champions league glory? I guess only time will tell us, but they are definitely one of the favorites for the big trophy.